(This information may only be copied or reproduced in any way what so ever for the purpose of participating in the activities of the National Eisteddfod of South Africa.) 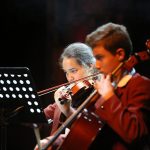 RULES AND GUIDELINES FOR CLASSICAL MUSIC

For the sake of clarity it needs to be emphasized that entries are categorized according to school grades.  Grading in this context has no link with the grading of external examining bodies as performance level indicator. (Also refer to the “General guidelines” in this regard.)  Subsequently, with the exception of novices (that refer to participants with less than 18 month’s experience in music), participation is not subject to any level of achievement at any stage.

A Novice is a student who have been study­ing for less than 18 months. Please refer to the separate Novice Section.

The refers to students that, having passed the novice stage of 18 months, are still performing pieces on an elementary level. Please refer to the separate Novice / Elementary level section

Please note that the proficiency of the accompanist is important, since it could impact on the overall artistic impression of the performance.

When accompaniment is required, an acoustical instrument should accompany participants in this section. A piano (or sometimes a digital piano) will be provided and no other electronic devices will be available. An electronic instrument that does not require additional sound equipment may also be used.

Important: Items that require accompaniment (usually a teacher or adult) are considered as solo items for the sake of entry fees.  Only when more than one student is involved the item should be entered as duo, trio, etc.

More advanced participants are encouraged to perform works as they were originally composed, rather than simplified arrangements.

In the case of an ensemble the score must be written in 2 parts (duet); in 3 parts for a trio; in 4 parts for a quartet, etc.  No continuous singing/playing in unison is allowed in this section.

General requirements (except if very short):

For any accompaniment in the Classical section an acoustical instrument and an accompanist is usually required. The reality is that this is not always possible. Although not ideal, participants will be allowed to perform (sing/play) with a recorded version of the acoustical accompaniment in the event of an accompanists not being able to attend the session.  These items should then be entered into the Crossover section so that it can be scheduled at venues where the necessary sound equipment will be available.

The Copyright Act 98 of 1978, as amended, prohibits the use of photocopies without the written consent of the publishers. Consequently participants must play from an original copy and will be DISQUALIFIED IF THEY PLAY FROM PHOTOCOPIES ONLY (the use of some copies to assist in turning pages is allowed).  Copies of the piece to be performed must be presented to the adjudicator.  These copies will be destroyed afterwards.